Located in the Huatanay River Valley in the Southern portion of Peru, Cusco is known as the archaeological capital of the Americas. Surrounded by mountains it is reaching 3,400 meters over the sea level. This is the oldest city in the Western Hemisphere and is identified as the “cradle of the Inca civilization.”

Cusco is a city that mixes the mysterious indigenous culture of the Incan civilization with modernity. Cusco is considered as the archaeological capital of not only Peru, but of all the Americas. It is a city that has to be shown to the entire world, with its ruins preserved in their traditional structure. The city was the capital and the heart of the Incan empire during the 14th and 15th centuries and today serves as the most visited tourist city in the country of Peru.

Places that are visited:
In the City Tour Cusco:

Outside the City Tour Cusco:

TOURIST INFORMATION CUSCO CITY TOURS:
Welcome to the city of Cusco, the ancient capital and spiritual center of the Incas, considered by them, “the navel of the world”, from where they left the four-way connecting all corners of the empire of Tawantinsuyu in Peru. (Machu Picchu Trekking)

Known by the locals of the time Aucaypata Square, which in Quechua means “Warrior Square” was one of the most important venues for the Incas who performed grandstanding as the Inti Raymi festivities. Its beauty highlighted by the beautiful frame given by its stone archways on two floors, work developed with the arrival of the Spanish in Peru. (Machu Picchu Trekking)

City Tour: The Cathedral of Cusco:

Its construction had two periods: initial Chapel Triomphe what was the ancient temple of Sunturwasi (House of God) was built; Cathedral consecutively over the palace of Inca Wiracocha. The facade and interior dominates the Renaissance style, with an interior decoration delicate carvings in cedar and alder. They stand out for their beauty the choir and the pulpit. Retains a significant collection of paintings from the Cusco School and embossed silver. (Machu Picchu Trekking)

The Temple of Koricancha, according to the chroniclers, was one of the most impressive buildings of Inca Cusco shone on the interior walls covered with gold leaf, as it was the main temple of the sun god The Spanish built on the original construction of the temple, 1534 -. Cusco Peru, the church and the Dominican convent, which was destroyed as a result 1650 earthquake and rallied around 1681 – Cusco Peru. The convent keeps valuable art gallery with paintings of the seventeenth and eighteenth centuries. Today this building is an example of Inca interbreeding between Western and indigenous culture. (Machu Picchu Trekking)
Address: Plaza de Santo Domingo, Cusco, Peru (Machu Picchu Trekking)
Hours: Monday to Saturday – 08:00 to 17:00 Friday – 14: 00-17: 00

If we want to exercise ourselves, walk to this impressive military fortress of the Incas, it will take 25minutes and 10minutes by car. Located two kilometers from the city of Cusco, Sacsayhuaman is a complex of granite platforms communicate with each other by stairways and doors. From the top of a hill, this fortress jealously guarded the capital of the empire. (Machu Picchu Trekking)

Besides his fame lies in the amazing precision with which the blocks are joined stone shape it. They also say that in the needed construction of work of 20 000 men and took over seven decades lift. Witty pay attention to detail in its architecture, as this stunning fortress represented the head of a puma, animal symbolizing Cusco during the empire. They also emphasize the Rodadero, natural rock outcrop, and Inca throne. (Machu Picchu Trekking)

What impresses us to reach Qenqo is the huge block of stone carved it is believed it was used to store the chicha, corn drink consumed during church services. Getting into this complex of tunnels and underground galleries, adorned with Inca deities, we will reach a circular courtyard in the center stands a stone or Wanka that could represent an image. (Machu Picchu Trekking)

Puca Pucara named in Quechua “Red Fortress” because of the red they acquire the rocks during twilight. Puca Pucara is another example of military architecture also worked as an administrative center, and invites us to walk the sidewalks, superimposed terraces, stairways and passageways where transited mythical characters of the Inca empire (Machu Picchu Trekking)

The archaeological site of Tambomachay is 8 km. (15 min.) Northeast of Cusco, by asphalted road, and 1 Km. From Puca-Pucara. It is situated on the skirts a hill near the main road to Antisuyo on the river Tambomachay. he is also known as the Cave of the Tambo and invades an area of ​​437m2, located about 3,700m above sea level in the Andes. Apparently It was the favorite Incan spa, but at the same time, was one of the pillars of the valley of Cuzco defense system. (Machu Picchu Trekking)

The name comes from two Quechua words: Tampu, which means collective and Mach’ay accommodation, which means resting place. However, according to other references, the word “machay” means “cave”, which narrate the peculiar environment of the place where these natural rock formations are seen, which according to the Indian tradition, were the object of veneration or magical practices. (Machu Picchu Trekking)

It consists of a set of structures finely carved stone aqueducts and waterfalls from springs and hot springs nearby (so you think it was related to the worship of water) is one of the pillars of the Andean worldview. It is considered one of the shrines of the first ceque of Antisuyo. (Machu Picchu Trekking)

As you acclimate to Cuzco’s altitude, you will have the opportunity to take a deep breath and enjoy a relaxing overview of the city and nearby ruins. The tour begins in the center of the city with a stop at Santo Domingo Convent Monastery. In its first incarnation, this was a temple for worshipping the Wiracocha God (the god of the sun). You will also visit the Plaza de Armas before driving to the nearby countryside to admire some of the Inca’s admirable handiwork.

An incredible mixture of Inca and Spanish-style buildings creates an air of mystery, which is difficult to not admire when you first arrive to the ‘Archaeological Capital of South America’. You will see that the two cultures (Spanish and Inca culture) are inextricably interwoven: religion, language, customs, mentality and even dreams. This tour is a must-do when visiting Cusco. 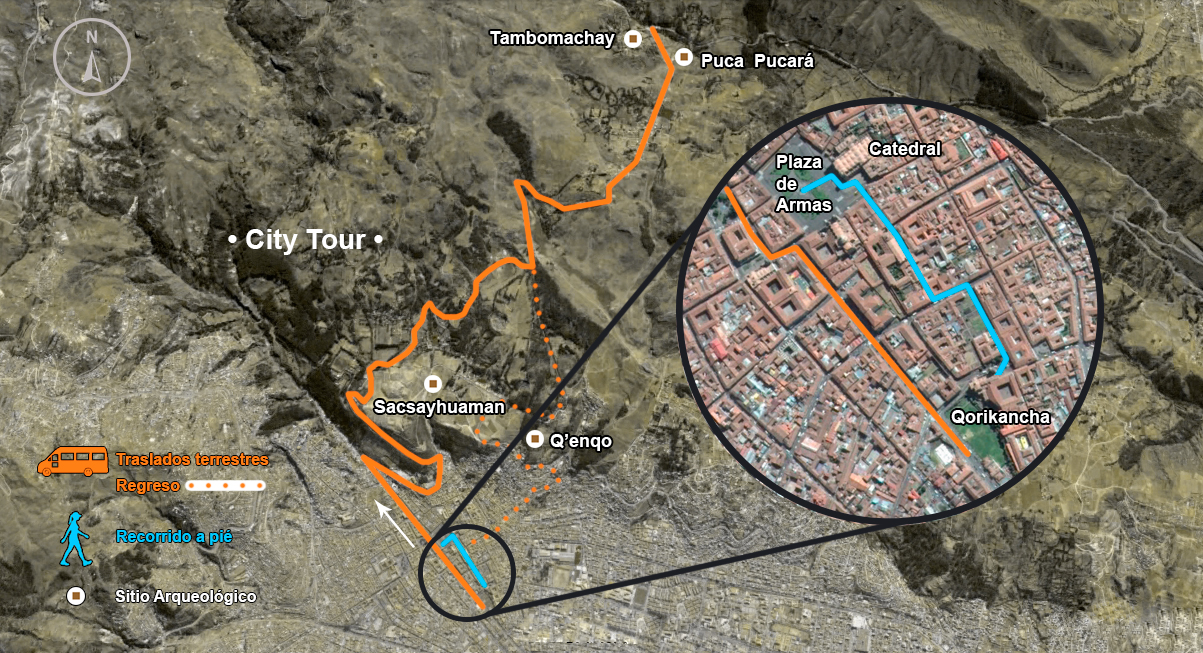 From$720
(0 Review)
6 travellers are considering this tour right now!